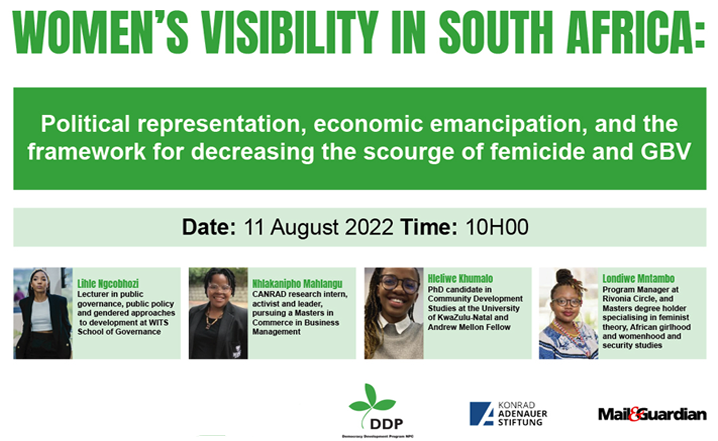 The 9th of August 1956 was a significant day where more than 20 000 South African women of all races marched to Pretoria’s Union Buildings in defiance of the pass laws. The year 2022 marks the 66th anniversary of the women’s march. This day is now celebrated as a National Women’s Day where the country pays tribute to the role played by women in the liberation struggle.

There have been significant strides made in the advancement of ordinary women not just in South Africa but across the globe. However, some challenges persist unabated. Gender-based violence and femicide is a major human right violation and a widespread concern to the health and wellbeing of women all over the world. The research conducted by the South African Medical Research Council indicates that every 8 hours a woman is killed by an intimate partner in South Africa. This highlights the need for more effective interventions in ensuring that women in South Africa feel safe and protected.

South Africa has made some progress in ensuring womxn’s participation in political and decision-making processes. The Protocol to the African Charter on Human and Peoples’ Rights on the Rights of Women in Africa is one of the most progressive legal instruments that provides a set of human rights for African women. Despite these significant measures, research conducted by the Commission for Gender Equity indicates poor representation of women in positions of leadership – even though women form the majority of the population.

President Cyril Ramaphosa has called for full participation of women in the South African economy, through the procurement of women-owned businesses. Moreover, women’s financial independence is crucial not only for economic inclusion which is central to a country’s development – but because financial dependency makes women more vulnerable to abuse. Therefore, the government must create a conducive and safe space for women where they feel protected and are able to gain and maintain economic independence.

Join us for a webinar which seeks to interrogate the following:

Are women’s issues genuinely understood from the intersectional lense?