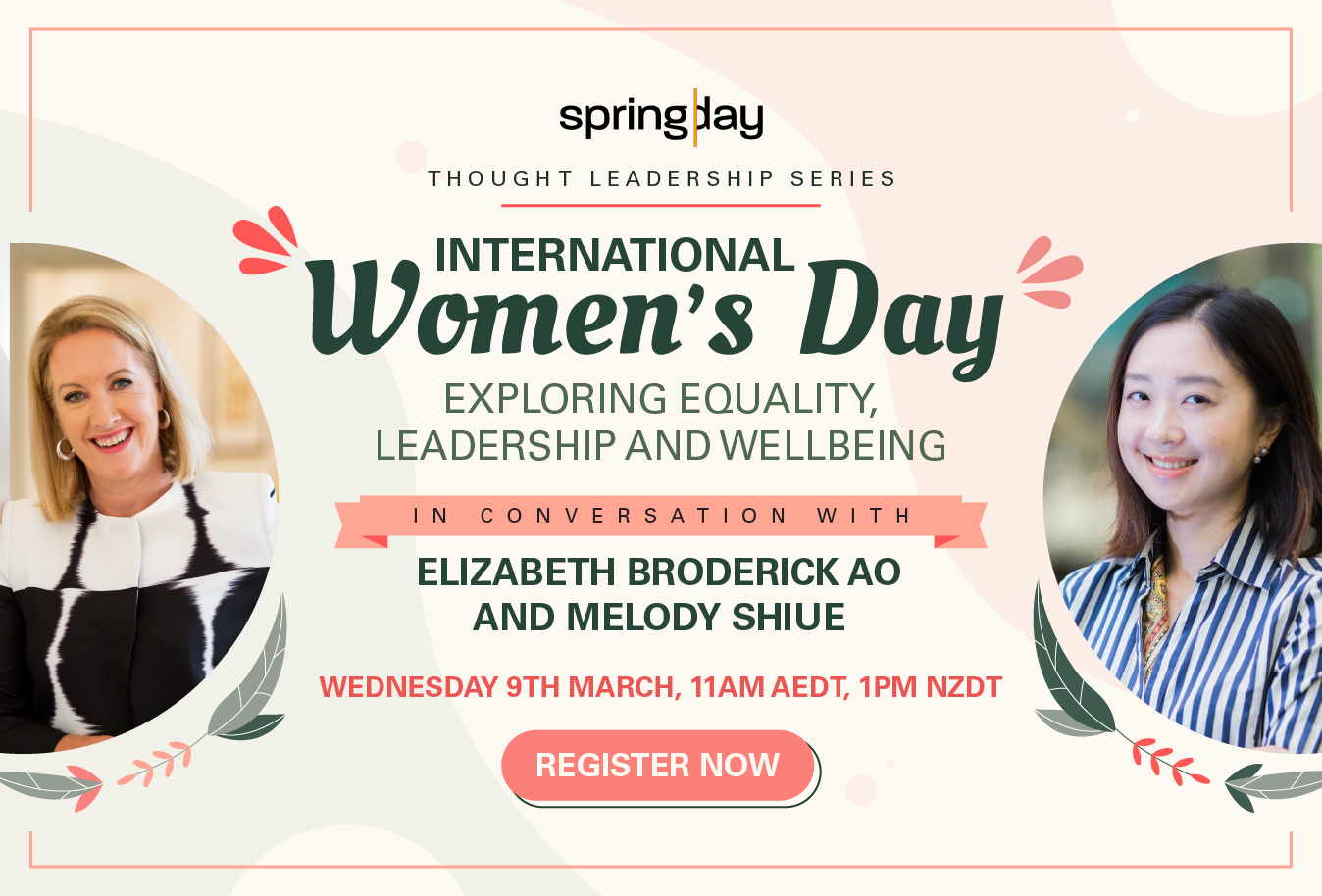 The theme of International Women's Day 2022 is #BreakTheBias. It’s all about actively calling out gender biases to take steps toward forging women’s equality, for a world free of bias, stereotypes, and discrimination. A world that’s diverse, equitable, and inclusive. A world where difference is valued and celebrated.

Join us as for an in-depth conversation with Elizabeth Broderick AO and Melody Shiue about how they’ve worked to break through biases they have faced as female leaders. We will explore their challenges and experiences, as well as their tips for wellbeing that will uplift, inspire, empower and motivate women to fulfill their potential across all areas of their lives.

Elizabeth Broderick AO - As Australia’s longest serving Sex Discrimination Commissioner (2007-2015), Elizabeth worked to break down structural and social barriers faced by women and men, and to promote gender equality. She is a globally acknowledged leader, social innovator and advocate. She founded and convenes the ‘Champions of Change’ strategy activating influential men to take action on gender equality. She has led 13 major cultural reviews into Australia’s leading national institutions including the Australian Defence Force.  In 2017, Elizabeth was appointed by the United Nations in Geneva as a Special Rapporteur and Independent Expert.  She is currently Chair-Rapporteur of the UN Working Group on Discrimination against Women and Girls.  Elizabeth is a Board member of the International Service for Human Rights and a member of the Global Institute for Women’s Leadership Advisory Council, Kings College London.

Melody Shiue - the Co-Founder, Director and Chief Design Officer of mPort, as well as the Product Owner for Springday. She is a visionary that has designed everything from rapid blood testing kits to wearable ultrasound belts for pregnant woman. Melody is not only an innovative designer and inventor, but also an inspiring leader and an entrepreneur. Her strength to envision innovation lies in stakeholder empathy, root cause deconstruction and resolving complexity into simple, scalable solutions.

Melody graduated from University of NSW with first class honours in Bachelor of Industrial Design in 2011. Melody developed a passion for medical design during her bursary exchange at Delft University of Technology, which lead onto her designing a wearable ultrasonic belt for prenatal telemedicine as her thesis project. Melody was also awarded the Silver Accolade for the medical category of A-Prime Design Award in Como, Milan.

Melody continued to pursue designing for better lives by interning at an innovative start-up called Endoluminal Sciences, before working at one of Australia’s top design consultancy firms, and then going on to co-found mPort.